By Imam Abdessalam Yassine
Translated from the Arabic into English by Monir Birouk
Source: Video
——– 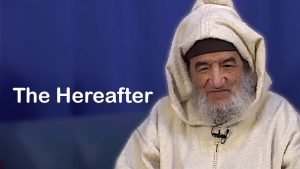 I seek refuge in God from Satan the accursed. In the name of God, Most Merciful, Most Beneficent. May God’s blessings and peace be upon His messenger, and his family and companions. Praise be to God, the Lord of the Worlds.

On this blessed day, we will- God willing- talk about the Holy Quran. We shall always refer to the Quran. We ponder the meanings which are conveyed to us through the details of the chapters and verses of the Quran but also through its overall structure.

The hearts which are shielded from the light of God don’t reflect on the Quran, as they can’t see the signs which God the Almighty sent down to us. There has come to us a light and a clear Book in which there is light. And the last of what came to us from the clear proofs from God is the Holy Quran.

Before the Quran, came the Torah, the Psalms and the Bible. God the Almighty says: (Indeed, We sent down the Torah, in which was guidance and light) [5:44]. What is the Book? The Book is all what God revealed to His messengers. And the seal of the prophets, Mohammed, may God bless him and grant him peace, came with a final, permanent and immutable version.

The people before us- we the blessed Umma- received the Torah and corrupted it. Those who received the Bible corrupted it, and they corrupted the Psalms as well. But the Quran shall remain, by God’s grace, intact till the Day of Judgment. How did the Quran come? How was it brought down? (The Trustworthy Spirit has brought it down upon your heart) [26: 193-194]. Gabriel, the Trustworthy Spirit, brought down the Quran upon the heart of our master Mohammed, may God bless him and grant him peace.

How did this use to happen? We are called upon to ponder the Quran. How did it use to happen? How did the Quran descend on the heart of God’s Messenger [may God bless him and grant him peace]? Somebody might ask me: “why should I be concerned about this?” “Why should I in any way know about it?”

Indeed, it is of utmost importance to know how the Revelation was brought down on the heart of the Messenger of God [may God bless him and grant him peace]. God the Almighty says: (Indeed, We will cast upon you a heavy word) [73:5]. A heavy word! . . . Heavy in what terms? Heavy by its meaning and light.

He used to see light where there was no light and he used to hear sounds. These things were strange and unusual for people. Stones as well used to speak to him. God’s messenger, may God bless him and grant him peace, told us that he knew a stone that used to talk to him whenever he passed by. This is also so unusual . . . that a stone speaks and talks. So all of this was a divine preparation for the descent of the Revelation. (Indeed, We will cast upon you a heavy word) [73:5].

The first part in that chapter begins with a Hadith narrated by our master Omar Ibn Al-Khattab.  “The reward of deeds depends upon the intentions”. It is as if he was addressing us: “O you who is about to get into the tradition of the Prophet, with what intention have you come?” This is a question we must ask ourselves, indeed.

In our assemblies, there should be room for questions, interaction and comprehension. “No people who gather in one of the Houses of God, reciting the Book of God and studying it among themselves, but tranquility descends upon them and mercy envelops them”. We should study it among ourselves and everyone has to take part. What is your intention behind reciting the Quran and reading the Hadith? That who prays interacts with his Lord.

In the last third of the night, God asks His servant: “Is there any request that I may grant?” “Is there anyone to seek My forgiveness so that I shall pardon him (and forgive his sins).”

What is spiritual journeying [suluk]? Whoever embarks on a journey for the sake of knowledge, God charts for him a path to heaven. The first step is knowledge. Before walking through a path, I should know how it is. Knowledge first. That is why the first thing to come down from the Revelation is: (In the name of God, Most Beneficent, Most Merciful. Read) [96:1].

People often refer to this noble Surat [Al-‘Alaq] to motivate people to read. We are an Ummah that should read. Yes, we should read . . . but why? It is said that other peoples read, so should we. Yes, but read what? We should not linger at this surface meaning.

We are an Ummah which received the Revelation. The first thing which is Revealed is to read, not merely everything, nor merely learn worldly sciences.  The aim which you should point your finger to is: (Indeed, to your Lord is the return) [96:8]. The greatest news ever! It is the great news over which they disagree. [78:2-3]. The greatest news God the Almighty announced to the human being is that he is created, and that he shall meet his Lord in the Hereafter.

Recite in the name of your Lord Who created you, Who bestowed His graces upon you, and to Whom you shall return. Then to your Lord is your return [6:164]. I always advise my brothers and sisters that while reminding people, our talk should be inspired by the Quran. It should be connected to it, not separated from it. People don’t evoke the Hereafter in their speeches, and they don’t tell each other about it as well.

It is the Lord to Whom we shall return, and not to the Subduer that we shall return; the latter would be hard and threatening. No, you shall return to the Lord Who created you, Who loves you, and Whom you love. The One Who forgives your sins when you err, and Who invites you to repent.

Therefore, we should go back to Him . . . to His mercy. We always say that people often set premises without conclusions. What does it mean to say that God exists, citing proofs for His existence, when you don’t speak about the Hereafter?!!

God the Almighty exists for sure; but when we talk to people and preach to them, we should tell them that they shall die. They’ll tell you: “I know I am going to die.” “This is no secret, and everybody knows it!” But what you seem to forget is that you shall be resurrected as well. Some skeptics will just say “I don’t believe in this”.

“Death is inescapable for sure, but I don’t think that I will be resurrected!” This is what the disbelievers used to say. (When we have died and have become dust, [will we return to life]? That is a distant return)!! [50:3].

This site uses Akismet to reduce spam. Learn how your comment data is processed.