– Ibn ‘Umar (God be pleased with him and his father) said: “When God-Almighty is He-revealed Chapter 96 [that begins with] ‘Read in the Name of your Lord Who created’, God’s Messenger (God bless him and grant him peace) said, ‘Write it down, O Mu’ādh.’ Mu’ādh took the tablet, the pen, the inkwell and began to write. When he reached the verse ‘No, obey him not. But bow down in adoration and draw near(to God)’, the tablet, the pen, and the inkwell bowed down, saying, ‘O Lord, raise with it the esteem [of who recites it]; O Lord, ease with it his burden [of evil deeds]; O Lord, forgive by it [his] sins.’ Mu’ādh (God be pleased with him) said, ‘I bowed down, and when I informed God’s Messenger (God bless him and grant him peace), he bowed down too.’” 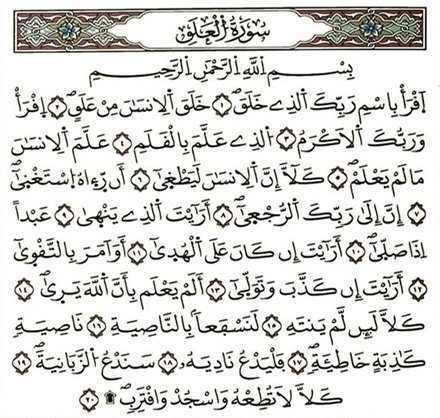