– ‘Abdullah ibn Mass’ūd (God be pleased with him) reported that God’s Messenger (God bless him and grant him peace) said: “Whoever reads [Chapter 3: Verses 18-19], ‘God (Himself) is Witness that there is no god but He, and (so do) the angels and those endued with knowledge, maintaining His creation with justice, there is no god but He, the Almighty, the Wise. The (true) dīn before God is Islam’, and then says, ‘And I too bear witness to what God bore witness, and I place this testimony [as a trust] with God, and it will be a deposit of mine with Him’, he will be brought [before God] on the Day of Judgment, and [God] will say, ‘My servant consigned to Me a deposit, and I am the Worthiest [of trustees] to deliver deposits [back to their owners]. Do admit My servant to Paradise.’” Hadith reported by Abu ash-Shaykh(God have mercy upon him). A similar hadith was reported by Abu al-Qāsim at-Tabarāni(God have mercy upon him). 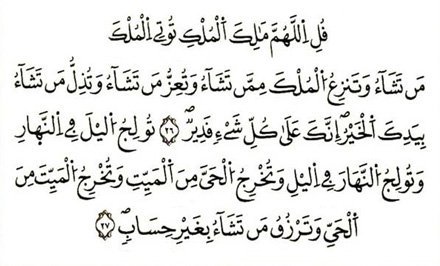