– Anas (God be pleased with him) said: “As we were in the company of God’s Messenger (God bless him and grant him peace), he slumbered for a while, and then raised his head smiling. We said, ‘What makes you laugh, O Messenger of God?’ He said, ‘A chapter [Chapter 108] has just been revealed to me. ‘In the Name of God, Most Gracious, Most Merciful. To you We have granted the kawthar [Fount of Abundance]. Therefore turn to Your Lord in prayer and make a sacrifice. Surely your enemy is the one who will be without posterity.’ Then he said, ‘Do you know what the kawthar is?’ We said, ‘God and His Messenger know best.’ He said, ‘It is a river of great abundance that my Lord-Almighty is He-promised me. It is a fountain-whose vessels are as many as the stars-to which my umma will come [to drink] on the Day of Resurrection. Some of my umma will be dragged away [by the angels] from the fountain. I will say then, ‘They are of my umma.’ It will be said, ‘You do not know what [evil, heretical deeds] they committed after you [had departed].’” Hadith reported by Imam Muslim (God have mercy upon him). 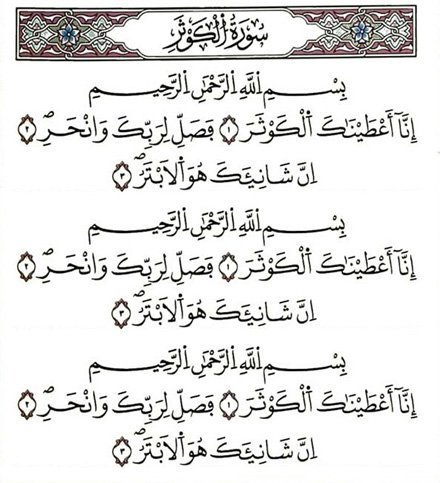